***If you are visiting this page for the first time, please do look at the previous posts in this section.

For me, being the eldest child meant being placed in a position of responsibility, even from an early age. I was the big sister and I was supposed to set an example to the others. I was also expected to help mum with the younger ones. Over the years I learned how to cook, bake, wash, iron, clean, sew, knit, mend and embroider. Skills that would serve me well in adulthood.

We had moved two our second house by the time my sister, six years my junior was born. I had a brother two years younger by this time. One memory I do have is of the day my sister was born. It was an unusual day because my grandma picked my brother and myself up from school. We were told there was a surprise waiting for us at home. And there she was, like a real life baby doll, a sister.

The fact that I don’t remember by youngest sibling, my second brother being born two years later is not at all surprising and is significant to my story.

In 1965 we moved house again – house number three. This time to Audenshaw, not far from Ashton Under Lyne and close to the area where the Moors Murders were taking place. My dad had sold our previous house and bought into a Blue Star service station with an adjoining house and garden alongside. 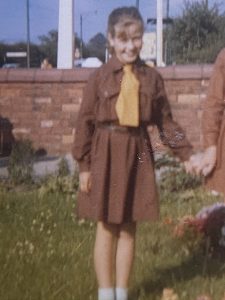 When I look back now, I can see that I was often left to my own devices when we lived in Audenshaw. I could regularly be found riding my little bike up and down the coal slag heaps of Ashton Moss and I was a frequent visitor to the Transport Cafe next door, becoming friends with an older girl who lived there. I was seven years old and I think I must have very often been quite a grubby child at that stage. Slag heaps are a dirty playground.

Mum was pregnant again, although, as I said, I don’t really remember that or my brother being born. I just recall how busy and pre-occupied both she mum and dad were at that time. Imagine the excitement then, when dad brought a puppy home. We called her Kim. My brother and I had great fun with her, my one year old sister spent all her time trying to avoid our boisterous games. But then as suddenly as she arrived, dad announced that she had to go. Mum couldn’t cope with her and so she was taken away from us. The joy of her arrival soon became the sadness of her departure.

Whilst living in Audenshaw, I attended Lumb Lane Primary School. This was now the third of my five primary schools. I was in the first year of the juniors. My classroom was in a different building to the infants, which my brother attended. I recall one particular day, when dad dropped me off by the junior school before continuing down the road with my brother. I got out of the car and stepped into the road, only to be hit by a passing vehicle. I wasn’t seriously injured but my leg was very bruised and I had to go home to recover. Another traumatic memory.

I’ve often wondered why I only seem to have these types of memory and I don’t have the answers even now. But I do know that the most traumatic was still to come…