🖤🖤 ‘Secrets behind the collar’ is my story. It is the account of the traumatic events not only of 2020, but also of the abuse suffered during my childhood and teenage years.  If you are reading my ‘Secrets’ blog for the first time, you may wish to go back and begin reading from where my story begins. My first post was back in January of this year and can be easily accessed on this site 🖤🖤

It was in 2001 that I first felt God calling me to do something more. I had no idea at the time what the ‘more’ might be, but with the fantastic support and discernment of my Vicar, I came to the conclusion that it might be a call to some kind of ministry.

People often ask, “Why did you choose to be a Vicar?” You don’t. God does the choosing.

The process that possibly leads to Ordination is deliberately long, beginning with one to one interviews, progressing to panel interviews within your own Diocese and then, if you are recommended, an interview at national level by members of the Bishop’s Advisory Council. This final interview lasts for several days. All in all, it is a rigorous process.

I really had no idea why God might be calling me. I was truly damaged goods; more damaged than anyone on any of those interview panels ever discovered. Only God knew and I decided that if I was rejected, then I would know how damaged he thought I was and it would remain between us. Strangers didn’t need to know and I wasn’t ready to speak out. It was my shame, my secret.

The questioning and the tasks set during the process are penetrating and demanding. As a candidate, you are called to bare your soul over and over again before actually being found suitable, or not, as the case may be, to attend what is affectionately known as ‘Vicar School’.

At the end of a process that lasted well over two years, I was recommended for Ordination and was offered a place at ‘Vicar School’.

This actually meant embarking upon a three year degree programme in Theology and Pastoral Care on the Northern Ordination Course, affiliated to the University of Leeds. It was a part time course, which I would complete whilst continuing with my post as a primary school headteacher.

There were several times during those three years of training when I had to face scenarios of sexual and emotional abuse, often in role-play situations or round table discussions. This was often being mirrored in my adjacent role as a headteacher and frequently involved liaison with Social Services and the Police as I dealt with frequent child protections and safeguarding issues. Strength of faith and God’s calling somehow carried me through the most challenging times.

I was Ordained in Chester Cathedral in 2007 and made Priest in 2008. After a training curacy of three years, I was installed as Vicar of my present church in March 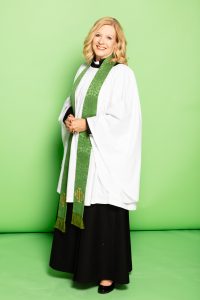 Being called to ministry is a huge privilege. It is a call to serve God and others in a very unique and special way. I love the role I’ve been called to as Vicar of a Parish Church.

In March 2020 I had been Vicar of a village church for nine years. I was well established and I’d never had any time off for illness, so to be in the position I found myself in personally and emotionally was hard to bear. To feel unable to minister to those in my parish who needed me made it even harder. Of course many of them had no idea why I was missing. How could they? Maybe they thought the Vicar had finally lost the plot! I don’t know. But I made the decision to be as open and honest as I could about why I was not working, to those who asked why I wasn’t working or how I was.

One of the most difficult things I encountered was the battle not only with the memories, but with my own faith. As the months of counselling progressed and a time when the memories and recollections were at their darkest, I really struggled to find God. This was totally unfamiliar to me. He has always been there for me. I’ve always been assured of that. But now I felt so alone and that He had turned His back on me. I can’t explain fully why. I had the most wonderful support from those within my church throughout. My Wardens and Assistant Priest were always there for me. But personally, I was struggling. Where was God in this? Had He decided that I shouldn’t have been Ordained after all, I wondered? I was hurt and confused and I’m sorry to say that the result was that as I couldn’t feel He was there for me, I turned my back on Him. For a period of time, as I worked through the worst of the trauma, I was spiritually lost. I couldn’t pray. I felt there was nobody listening. It can happen, even to a Vicar.

I wasn’t to feel the weight of God’s loving presence upon me until the end of the summer. Whilst holidaying in Devon with my husband, we visited Exeter Cathedral. It was there that I discovered that ‘thin place’. A ‘thin place’ is a place where the veil between this world and eternity literally feels thin. It is a place where you can palpably feel God’s presence. Standing on the shore of the Sea of Galilee has always been a thin place for me, particularly the northern shore. But on this day, as I stood in Exeter Cathedral, a place I’d never before visited, the tears gently rolled down my cheeks. I could feel Him.

That experience, that visit to Exeter Cathedral was to prompt me to make contact with the Bishop of Exeter, a Bishop I have known for many years. It led to some of the most compassionate, caring and loving ministry that would lead me back fully into God’s presence.