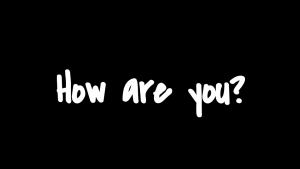 This week I watched the very moving documentary featuring Roman Kemp, ‘Our Silent Emergency’, where he spoke candidly, not only of the devastating effects the suicide of his friend had upon him, but also of his own long standing mental health issues. It was both brave and honest, and I’m so glad that both my children watched it through. If you’ve not yet seen it, it’s well worth finding on Catch Up.

One of the things which resonated particularly strongly with me, was the discussion around some words which slip off the tongue time and again every single day, without our really thinking about them.

How often do we meet somebody and ask ‘How are you?’ without thinking too deeply about the question we are asking, and when asked it of ourselves, answer: ‘I’m fine thanks, how are you?’ How often do we instantly turn that question around and deflect it. How often do we avoid really answering the question and opening up a conversation? Do we avoid it because we believe the person asking doesn’t really want to know how we are? Have we allowed it to just become an automatic polite greeting and response?

But this is the thing: in this current situation, shouldn’t we be more mindful of how people are, of how they really are?

In his broadcast, Roman Kemp spoke to a group of young men who had lost a close friend to suicide. They had decided that they needed to do something positive moving forward and so they had made a pact to ask a question twice. Their question was: ‘Are you OK?’ followed by ‘Are you actually OK?’ They believed that if they had probed deeper into how their friend was feeling, if they had been there for him in that way, then maybe he might still be alive today.

My message this week is short, but if you read this, please, please, when you next speak to a friend, by phone, by text, by email, by FaceTime, or whatever media, don’t just accept the deflective answer. You could make such difference to somebody by taking the time to delve a little deeper and by asking the question: ‘How are you really?’

As we move out of lockdown, talking to one another and supporting one another is going to more important than ever. The restrictions, stresses and strains of the pandemic have been hard on us all and have affected us all, and we need to be open and share our feelings and our experiences so that others feel able to share theirs.

And so I’m asking:

Please, please, message me if you need to talk.