Of course, there was one other person to speak to about my possible training at Bretton Hall, and he wasn’t happy at all. This was going to ‘change’ me. He became nastier as I made my way though the process of application. His control and demands became greater. Coercion was his number one tactic and I came to dread the end of the evenings I spent with him. Sadly, I didn’t have the emotional capacity or mental strength to break it off. I can see now that I should have done.

In the summer of 1976, I passed just two A Levels – Music and English Literature. I also passed the magical Grade 8 Piano exam required and so I had scraped through enough to get myself to Bretton.

Dad was back home; the woman he was having the affair with never intended leaving her husband and very nice home for this man who could offer her nothing whatsoever. He discovered he had no option but to ask mum to take him back. And she did.

At the end of September 1976, it was mum and dad who drove me to Bretton Hall in West Yorkshire, my home for the next three years before graduating with a Bachelor of Education Degree from Leeds University. 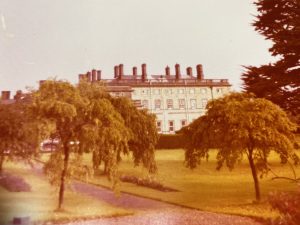 Bretton Hall was affiliated to the University of Leeds and specialised in courses in design, music and the visual and performing arts. I feel hugely privileged to have trained there from 1976 – 1979

Today the Hall is closed and the grounds are home to the Yorkshire Sculpture Park.

I found the initial experience of Bretton life quite daunting. I’d never known anything like it. I’d never been away from home and I wasn’t at all prepared to be amongst all the seemingly, very self-assured arts students. I had such little self-confidence; after all I’d had somebody continually undermining me and putting me down for some time. But I’d worked so hard to get to this point and I was determined that I was going to succeed and to qualify as a teacher.

I was placed in a large room in the mansion house pictured above, with three other girls. It soon became a popular meeting place for all manner of students. I began to make new friends with whom I would either keep in touch with, or eventually become re-united with through the wonders of social media.

So where was my abuser in all of this? He came along for a visit that first October and it was soon apparent that he was neither comfortable, nor happy; he was in such a foul mood for the whole weekend.

In November 1976, he was due to come to stay for another weekend. This was before the days of mobile phones, so all communication was reliant upon my phoning his home number. On this particular Friday I phoned from a public phone box in Barnsley to check upon his arrival time.

“What time are you getting here?” I asked when I made the call.

That was it. We were over. I never saw or spoke to him again.

I felt as if I’d been thrown aside like the worthless article he’d always convinced me I was. The truth was that I really was useless now because he’d lost control.

Looking back, I should have just felt relief; this was the ultimate escape from a totally dark relationship with the potential to lead who knows where. But all I felt at that time was rejection. He had discarded me like a piece of rubbish for the bin.

That sense of rejection, and the fear of being rejected, would remain with me for decades; it was just another result of his horrible legacy. It would affect me in so many ways in the years to come, continually present, diminishing my self-confidence, from larger issues of being passed aside for a job or position of responsibility, to the very minor, having a text ignored or unanswered by a friend. It has never mattered the size of the rejection, it is just that fact that I have been rejected, discarded as he discarded me that day in November 1976, because I was no longer of use to him.