As promised! The story of the bike ride!

When I was approached with regard to being involved in the 100th Anniversary of the Royal British Legion Poppy Appeal back in August, I jumped at the opportunity. The organiser, Kevin Murray, asked if St Paul’s could be the starting point for 100 motorbikes, each of which would carry a street Poppy bearing the name of a fallen soldier on a half hour Ride of remembrance I said that it would be an honour and also asked whether I could take part. ‘Do you have a bike?’ I was asked. ‘No, but I know a man who does’, was my answer. I quickly contacted my friend Chris Basford, who said he’d be delighted. He also promised to equip me with kit. What a gent! However, as the day drew near it became apparent that Chris was not going to be able to make it. I was a Rev without the means to rev! I had the kit, but no bike, no rider! But bless Chris and Kevin, a message was put out to all riders and in stepped Neil (pictured with me above). I met Neil minutes before getting on his bike. Kevin introduced me to this serious looking biker, dressed in his leathers, tattoos on show (I know, I can’t say anything about tattoos) beard in bands. He did look a bit scary and I wondered what I was about to experience! He then identified the bike we were riding – a Harley Davidson!  Within a few minutes of discovering this I was astride the bike being interviewed by the BBC. If that sounds as if it was easy to jump on the bike – I can tell you that it wasn’t! I’ve only got short legs! 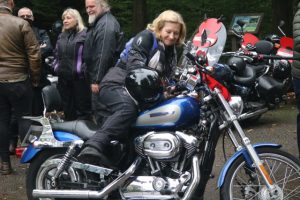 Eventually it was time for us to set off on our ride. I explained to Neil that he needed to treat me as a novice. It had been decades since I’d been on the back of a bike. I really needn’t have worried. Neil Brown is one of the kindest men who looked after me wonderfully. There were hairy moments – going over the top of the hill at the Windsor Castle and then the sharp left and then ride hand bends, but they were only hairy in my imagination.
I loved every minute of my Harley ride and I felt so very privileged to be on a bike bearing the name of someone who had made the ultimate sacrifice for all our sakes. The poppies were carefully removed from the bikes and placed on a Wall of Remembrance. We were each given a commemorative badge in return.
As I stated, this was a tremendous privilege for me and of course, as many of you know, the fulfilment of a personal ambition. I also feel extremely blessed to have met Neil, his wife and his son (who incidentally also rode his bike in the event) in the process.
💙💙💙

One thought on “Ride of Remembrance and Harley fun!”