My ‘Secrets’ blog is a serialisation of my story. You may want to first go back to read previous weeks’ accounts 🖤 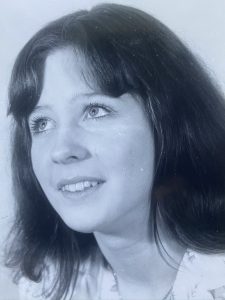 I was flattered when he first asked me out. He was three years older than me and quite a popular guy. Basically, I think I believed he was a bit of a catch. He could certainly turn on the charm, and sadly, I fell for it. When I look back now, I can see that I was just a child. I had no idea of what I was getting into. I was going through hell at home and he initially provided a sanctuary.

We fell into a routine of going out and spending time together. He had a scooter when we first met but quickly progressed to a motorbike. All seemed well to begin and I suppose we must have enjoyed some good times together but I honestly can’t remember any, probably because what happened subsequently has overshadowed them.

He took his driving test and began driving his dad’s car, before eventually selling the motorbike and buying his own car, a Triumph Spitfire. I didn’t know at that time that the motorbike had afforded me some element of safety. I could never have envisaged or predicted how things would change once he had a car.