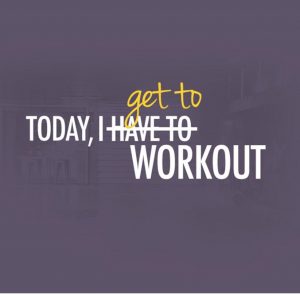 “These workouts are not for the faint hearted…” says Joe Wicks as I’m putting myself through the first workout of Cycle 4 Advanced, on his App this week.

As I tackle press-up after press-up (with variations on the theme and interspersed with the odd Burpee or two) I totally agree with him!

Forty minutes later and I’m  collapsed in a heap on the floor: a happy, but exhausted heap.

I rose to the challenge of a new and ‘extreme’ workout (Joe’s word) with all its press-ups, weights and burpees and I feel good!  I feel energised. A good slug or two of water and I’m quickly back up on my feet and heading off to de-sweat and eat a well deserved breakfast.

The day has begun and I’m so thankful for it being in this way; I never take my early morning workout for granted because I know what it’s like not to be able to do it; a severe bout of Shingles last summer put me out of exercising for months and resulted in my mood becoming increasingly low. So now each day when I wake up, I say ‘thank you’ for the blessing of simply being able to get myself out of bed to workout.

As you will know, if you’ve been following the ‘Secrets’ pages of my blog, I went through hell last year, literally went through hell, culminating in that episode of Shingles. Without doubt, the ability to be able to exercise again helped to bring me through the mental battle.

I then took the plunge and signed up for the Joe Wicks App.

Since signing up in December, I’ve been delighted in the results I’ve experienced physically, but more particularly in how I feel about myself. Last year, my self esteem and sense of self worth was thoroughly shattered, but now I feel strong physically, I feel strong mentally.

I am sleeping so, so much better and I know that I’m also much better hydrated. I’ve cut down on caffeine considerably (probably a contributory factor in the better sleep) and instead am drinking 2.5 litres of water each day, which I believe has resulted also in me having a much flatter tummy than I’ve had in years! What a bonus!

Bring on the next challenge!