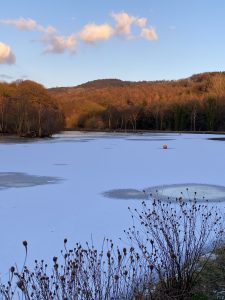 The past week has been one of such contrast in weather. We have had sleet and snow and then the most gloriously sunny periods of time. The photograph above was taken as the sun was going down over Etherow this week. The trees were lit with the most wonderful golden glow, and across the lake the windows of the houses in Compstall village looked as if they were made of pure gold. It was all soul touchingly beautiful and it brought to mind a poem my grandma used to delight in reading me, as a child, by the American writer, Helen Steiner Rice. It was called the windows of gold and tells the story of a young boy who sees golden windows across the valley from his home high on the mountain side. His dream was to go down the valley to the place he could see, where the windows of the houses were made of pure gold and so, one day he set off on the arduous journey from his mountain home. It was not an easy trek for the young boy, and by the time he reached his destination his feet were bleeding and his clothes were tattered and torn. But he kept his eye upon the goal, to reach the windows of gold. Hungry, cold and very tired, he arrived in the town of his dreams as the sun was setting and to his dismay, found only houses with ordinary windows and not of the gold he’d been pursuing. As he cried out in despair a kindly stranger turned him around and his gaze fell upon his own home up on the mountainside, it’s windows now shining, as if made of the purest gold.

All too often, we spend so much of our time looking and comparing what we have with what other people have. We look at the lives they lead, their seeming good fortune and wish it were our own, and when we do that, we are in danger of forgetting just how fortunate and blessed we ourselves are. We all have riches in abundance.

This Wednesday sees the beginning of Lent in the Christian Church. It is a season of repentance – a turning around from one way of life to another. So many people see it as a time to give something up, like chocolate or alcohol, but maybe there is something different we can do this year. Maybe we can turn around like the boy in the poem, maybe we can turn away from wanting and wishing we could have what others seem to have and instead give thanks for the gold, the riches, that are already ours, within our own lives.  And when we do this, we might just realise that we are more blessed than we initially thought we were.

The Windows of Gold

There is a legend that has often been told

Of the boy who searched for the Windows of Gold.

The beautiful windows he saw far away

When he looked in the valley at sunrise each day.

And he yearned to go down to the valley below

But he lived on a mountain covered with snow,

And he knew it would be a difficult trek,

But that was a journey he wanted to make.

So he planned by day and he dreamed by night

Of how he could reach The Great Shining Light.

And one golden morning when dawn broke through

And the valley sparkled with diamonds of dew.

He started to climb down the mountainside

With the Windows of Gold as his goal and his guide.

He traveled all day and, weary and worn,

With bleeding feet and clothes that were torn.

He entered the peaceful valley town

Just as the Golden Sun went down.

But he seemed to have lost his Guiding Light,

The windows were dark that had once been bright.

And hungry and tired and lonely and cold He cried,

“Won’t you show me the Windows of Gold?”

And a kind hand touched him and said,

“Behold! High on the mountain are the Windows of Gold.”

For the sun going down in a great golden ball

Had burnished the windows of his cabin so small,

And the Kingdom of God with its great shining light,

Is not a far distant place, somewhere,

It’s as close to you as a silent prayer,

And your search for God will end and begin

When you look for Him and find Him within.